While I’ve spent plenty of time with Mega Man X, I’ve never played any of the portable entries.

I’m actually really curious about this one, as I can either see it being really good… or really horrible. I take my Mega Man X games very seriously, so I have my doubts it can handle really well with two buttons on what’s basically a glorified NES with a teeny tiny screen. That said, I really, really want to be proven wrong! 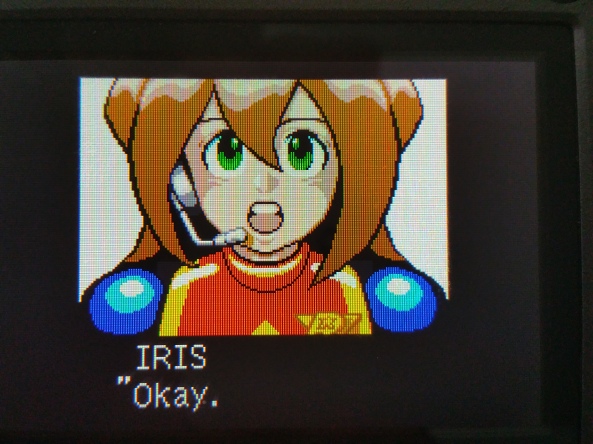 I’m not gonna lie here, after playing through my lunch hour I am not impressed. It’s true that Mega Man (X) is one of my favorite franchises, and as a result I tend to be a little protective of it, and that may be skewing my outlook on this game a bit. The game’s presentation was initially impressive, as was the speed at which the game actually played, however, the handling on it is completely unwieldy.

Mega Man Xtreme 2 feels difficult, but not because it’s a Mega Man game. In that regard, it’s on the easy side. It’s difficult because I’m playing a downgraded port of an SNES games made for a 6-button controller on a 2-button handheld that simply doesn’t allow for the kind of dexterity required for games like this. 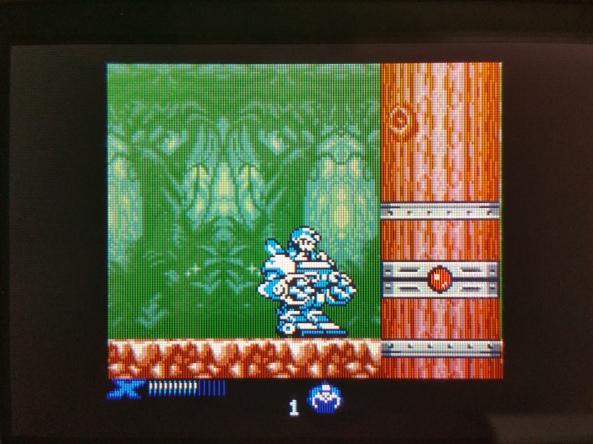 As a result, I’m not having very much fun with this game, because I can’t play it in the way that I would like to play it. Adapting to a 2-button control scheme is fine, I mean it’s Mega Man, but playing it on a Gameboy just feels unmanageable.

The game itself is okay, conseptually, even though it’s mostly just recycled assets from former Mega Man X games. Seeing the GBC version of Flame Mammoth’s stage was fun, as was playing through it.

Tonight I’ll try it out on the GBA Player and see if it feels any better. 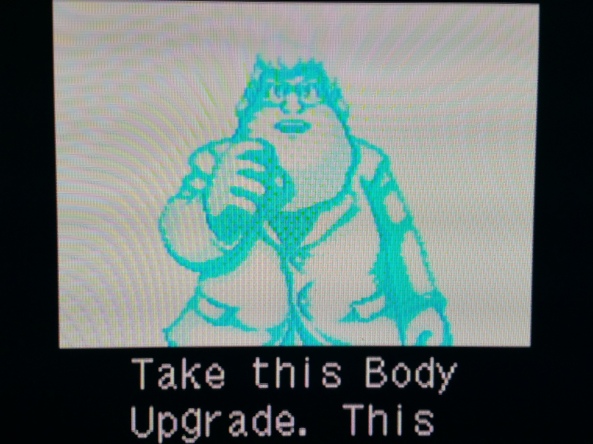 Back to Launch Octopus’ stage, this time on the big screen. It’s too bad about the input lag on the GBA Player, as it makes playing any kind of precision games really difficult. Still, the bigger screen does actually make playing this game a lot more manageable, and I’m actually able to clear the level! 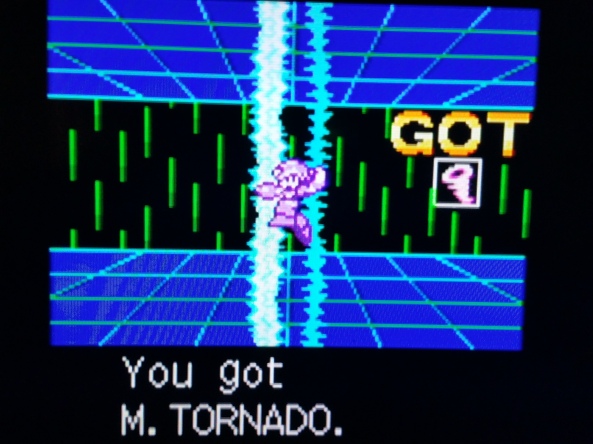 I went back to the handheld after that.

Playing on the console, at the very least, helped me get my head around the game a little more, which in turn helped me play through it on the Gameboy. 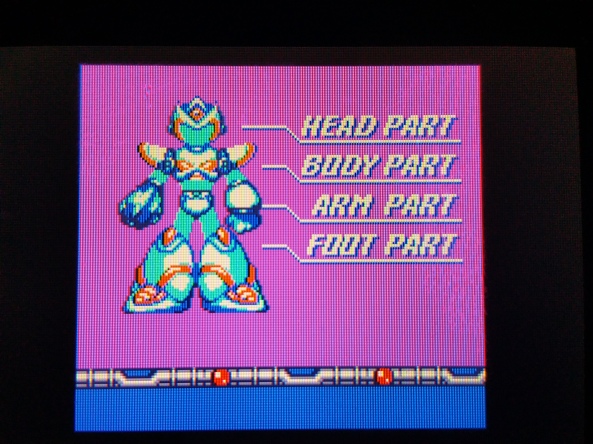 I was able to pick up all the armor upgrades and make my way to the final castle area.

At this point the stage design has picked up really nicely, or at least it’s more original. Climbing to the top of the first area had me fighting Sigma’s dog from Mega Man X, but switching to melee attacks had him going down quickly. The second facility wasn’t as forgiving… 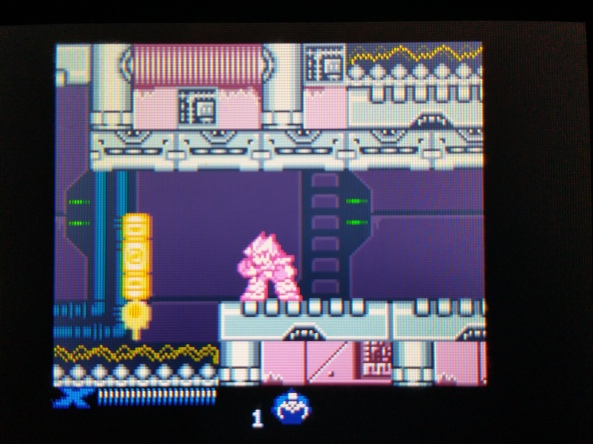 I should also mention at this point that I turned on auto-charge and rapid fire. Part of me feels like having these on makes certain parts of the game too easy, but it helps me focus on the other aspects of the levels which in turn makes the game a lot more playable and fun.

Reploid Facility 2 had all the floors and walls trying to kill me, and in turn I was dashing, jumping and air-dashing all over the place, ultimately using a couple continues just to reach the end boss, who I was unable to kill. I have a better idea on how to fight him now though, so next time will hopefully be different.

I have to say that while I still have a lot of issues with Xtreme 2, the game is growing on me.

Another spot of lunchtime Mega Man today and it didn’t go a whole lot better than last night, as I’m still stuck at the same point in the game. Mega Man X2 and X3 started employing some very cheap platforming tactics, often hiding spikes just off screen or other ways of killing you without a chance to react, basically boiling levels down to a memory game. I bring that up because I’m seeing a lot of that in Xtreme 2, and it’s getting frustrating.

The final stages in the this game are probably the best the game has to offer, which isn’t all that surprising considering the rest of the stages are just watered down reinterpretations of SNES levels. At the same time, playing through them is rage inducing. You just start to get used to dashing around on the Gameboy, blowing away enemies and tackling crazy platforming sections on a tiny screen… then… your shoulder barely clips a death wall and it’s game over. Naturally, death wall looked almost identical to normal wall…

Anyway, I think I’ve reached my limit with Mega Man Xtreme 2 and it’s best I call it before I grw to hate it.

Well, it’s the best Mega Man X game on the Gameboy Color! I really appreciate what this game’s trying to do, and for the most part it does an admirable job of it. Once you’ve mastered the slightly odd dashing system the game becomes fast, fluid and god help me fun. Sure, auto charge and rapid fire are damn near required to be able to enjoy the game, but that’s why we play games after all. The graphics are… okay… and the music tries hard.

The game felt like the designers sat down and tried to figure out how they could make Mega Man X on the Gameboy, when what they should have done was figure out how to make Mega Man X for the Gameboy. NES to Gameboy ports tend to work just fine, but SNES ports? Not so much. That’s not to say Xtreme 2 is completely derivative though! The item shop system and different game modes are actually really cool, and things I would have loved to have seen in the SNES original. In spite of what it does right though, actually playing it just feels like a flawed, watered down experience.

– Game manages to capture the spirit of Mega Man X even given its limitations.
– Sometimes the platforming is really fun.
– Switching on the fly between X and Zero is a great addition, as is Boss Mode and Extreme Mode.
– Item Shop and equipment make managing and customizing characters more fun.
– Lots to unlock if you have the patience, plenty of reasons to come back as well.

– Graphics should have been stylized to the platform, instead feel like bad downgrades.
– Same for the music, even though I enjoyed most of it.
– Difficulty comes more from playing on the Gameboy and iffy level designs than from actual gameplay.
– Boss difficulty ranged from laughably easy to impossible, and not in any particular order. 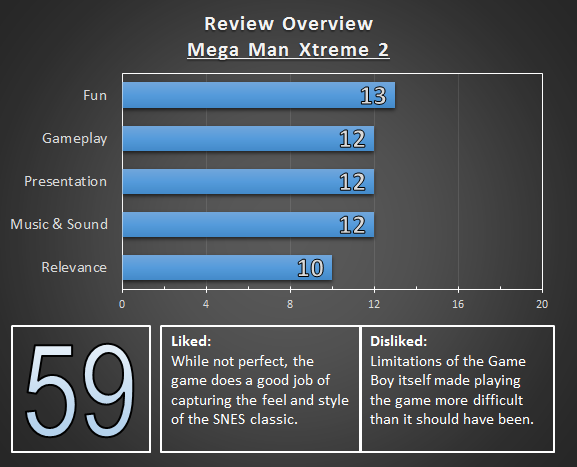