This was one of my favorite, if not my actual favorite, games as a kid, right there with Mega Man 3. I’ll never forget Air Man and Bubble Man’s stages and even now various music tracks from the game are running through my head. It’s been over a decade since last I played it, and I’m looking forward to playing it again. Additionally, the copy I’ll be playing was my actual copy of the game from ~25 years ago, so there’s that, too!

I beat Mega Man 3, so I should be able to get through this one as well. Either way, it’s gonna be awesome.

And I’m off! Metal Man was the first boss I decided to take down and… it was all pretty easy. Metal Blade in arm I then set off to go collecting more weapons!

I forgot how much I love the stages and music in this game. I also forgot exactly how this one plays. Mega Man 3’s gameplay was air tight, whereas Mega Man 2 is somewhere between the third entry and first. You don’t quite have the momentum you do in Mega Man, but you don’t stop on a dime like you do in Mega Man 3 either. If i had to compare it to something, I’d so it handles almost like Super Mario Bros.

When most people think about Mega Man 2 the first thing to pop into their head is Air Man’s stage. For me, however, it’s Bubble Man’s level, and the accompanying track. I don’t know what it was about this stage that made it stick with so strongly over the years. It could have been the transition from navigating a waterfall to running around underwater and back again, or those crazy frogs and fish… Either way, still a great level.

I really wish I could get better action shots, but these will have to do. I remember everyone complaining about Crash Man back then, but for some reason Air Man proved the most challenging for me, at least in so far as coming the closest to actually killing me! 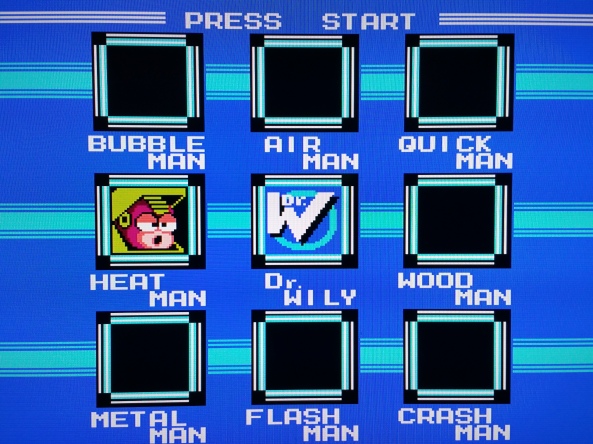 I saved Heat Man for last so I could cheat and use Crash Bombs and Weapon 2, making his stage MUCH easier.

After that it was off to Wily’s castle and that oh so amazing music! I had a great time fighting that crazy dragon and dropping in on that wall… boss… thing… I did finally manage to die against the wall turrets boss as I ran out of Crash Bomb ammo and had to restock. I’m curious as to what the “right” way to handle that encounter is, so as only to need one attempt.

The boss gauntlet, my favorite part of every Wily’s castle! After putting all the robot masters down for a second time it was off to fight Wily a few times!

The first two forms were very easy, just spamming buster cannon shots and boomerangs, and the thirst form just required some patience… and some bubbles…

I forgot that this was how the last fight ended, and literally laughed out loud.

Mega Man wins. Wily grovels. All is right in the world. 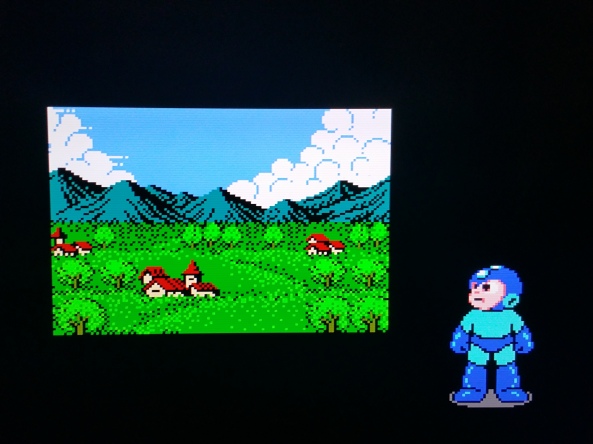 I knew Mega Man 2 was going to be a one-nighter, but I didn’t expect to be done in under an hour! While I’d love to say everything leading up to this point just made me incredibly good at video games, the truth is Mega Man 2 is, all things considered, a pretty easy game.

It’s an amazing game, and there’s still challenges to be found, but I’d have to say it’s right about on par with Mega Man X in terms of difficulty, if not even easier.

This isn’t necessarily a bad thing, either. If I had to kill a bit of time and I had a Mega Man itch, I think I’d still take this one over Mega Man 3 any day. The slight drop in difficulty means I can relax a little and just have fun playing the game, rather than having my attention at 100% focus. Add to that the fantastic music and great 8-bit graphics, and the experience as a whole is immensely enjoyable. It’s hard to think up too many complaints with this game. While it doesn’t lag like Mega Man 3 the sprite flicker can get really crazy. In addition, the bosses tend to be WAY too easy in relation to their stages. Regardless, 25 years later and I still love this game!

– While not pixel perfect, the controls where tight enough to create exceptional platforming experiences that were both fun and rewarding.
– Music is possibly best in series.
– Stages are all fun and unique, as are their robot masters.
– This was the game that really defined trends seen throughout Mega Man’s 8 and 16 bit lifespan.
– Game was not so difficult as to require laser focus, allowing for a more fun, relaxed experience.

– Bosses tended to be way too easy, often going down in 1-2 hits from the right weapon.
– Sprite flicker could get really intense. 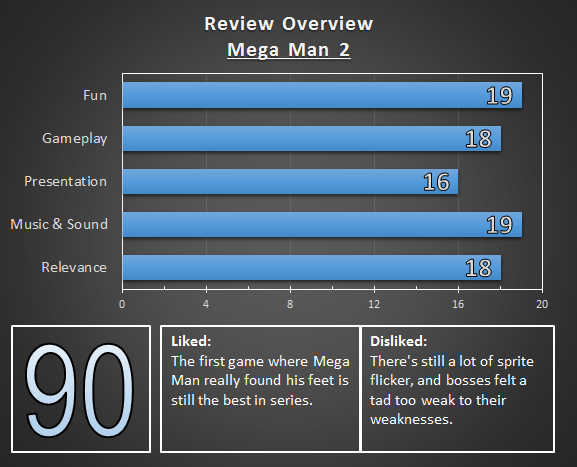