I feel like I may have played this once or twice when I was very young, but I can’t remember. I do remember beating Super C just a few weeks ago though!

I know it’s going to be hard. I know I’m probably going to yell a lot. That said, I’m really gonna try to beat this game. I’d really love to have two Contra games under my belt. Either way I’m sure I’ll have a lot of fun with it!

I don’t know why but whenever I think Contra I think this wall… Anyway it’s apparent right from the get-go that this is a much slower game that Super C was. This is both good in that seeing a dodging incoming fire becomes easier, but I also have to readjust to my own character moving a bit slower.

Level 2 is the first of a few of these over the shoulder stages, and frankly I like these a LOT more than the top-down stages in Super C and Contra 3. Judging depth is a little tricky but I had fun jumping around these stages.

King of the waterfall! Stage 3 ended with a big crazy alien boss that was way too easy. Of course, I’m saying that finally ending a stage with the Spread Shot, which basically makes everything way too easy. Just like in Super C most bosses tend to have a “safe zone”, where you can stand and shoot them, but they can’t hit you. This is actually less so in Contra though, as most bosses do tend to move around.

Stage 4 was a strait forward snow level, where the background grenades from Super C apparently make their debut.

Stage 5 was the first stage where I could really feel the environment trying to kill me. Fire would shoot from the walls leaving just a split second to jump past it and avoid the next flame jet.

After that was another over the shoulder level, then the factory…

Even more BS here with these stupid falling claws, and almost moreso with the spike walls that would come out of the floor… After clearing this stage, it was already off to the final level…

…then the shrimp dispenser, courtesy of Ridley Scott.

The final alien stage was much easier that in Super C, though just like in Super C was made even that much easier by grabbing the Spread Shot halfway through.

Upon reaching the end of the level I encountered the final boss. Again, just as in Super C, I was able to just stand at the base of the boss and fire away!

I almost feel bad for how many times I mentioned Super C, but if I were to play the games in reverse I’d no doubt be constantly mentioning Contra. You can’t not compare the two. Contra is a fine game by itself, though I don’t believe it lives up to its hard as balls mythos. In fact, compared to other NES games (Including Super C) the difficulty tends more towards the tamer side. That’s not to say it’s not challenging, but it’s not as challenging as some might lead you to believe.

Part of this is due, I think, to the length of the game. I couldn’t help but get a felling of “Oh what? I’m already done?” at the end of the game. While beating Super C left me exhausted and accomplished, Contra had me feeling wanting.

Judging Contra on its own merits, it’s a fine run and gun game. The graphics are actually really solid, and the music is fine but forgettable. The controls are tight as can be and any death you incur feel entirely like they’re your fault. Because they are. All in all Conta is a great game, but I can’t understand how it was ranked so much higher than its sequel.

– Perfect controls allowed for solid gameplay.
– Graphics are great, no flickering or studdering. I didn’t notice any lag either.
– Over the shoulder levels are a great touch, and should have stuck around for future installments.
– I actually appreciated having a shorter game to play. Didn’t feel like it dragged on for too long.

– Was expecting a game that would have me pulling my hair out, but ended up with something more middle of the road in terms of difficulty.
– Game felt a touch slower than I would have liked.
– The laser is still useless. 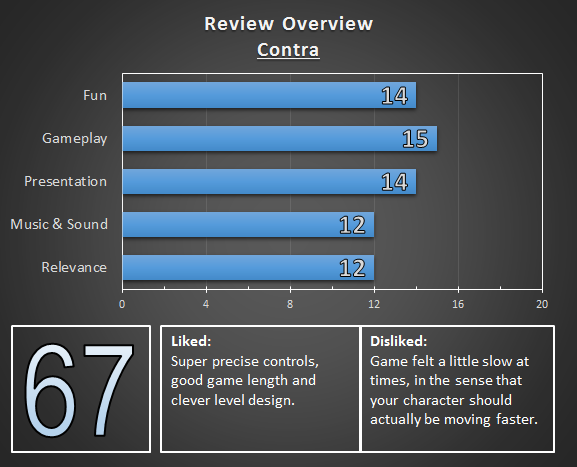